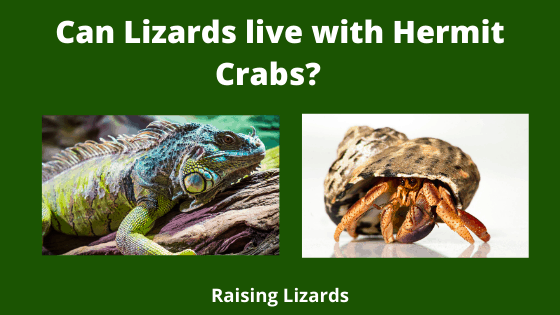 Most reptiles, including lizards and turtles, do not do well living with other species. The most important factor is the most obvious to ensure that reptile species will not eat or attack each other. Your reptiles should also thrive in the same habitat and similar temperatures. Keep frequent watch on your reptiles so that you can remove aggressors promptly.

“Keeping lizards with Hermit Crabs is not a good idea. They could live with a high humidity reptile, but they have their own heat requirements and food requirements. The hermit crabs may also harm the lizards if they are too close to each other.

Hermit crabs also require a dish of salt water and a lizard typically would not do well with that.

The humidity hermit crabs require is too much for most reptiles, and for those who can handle it, there are more issues from there.”

Habitat of Lizards and Hermit Crabs

Lizards are found worldwide in every type of terrain. Some live-in trees: others prefer to live in vegetation on the ground, while others live in deserts among rocks. For example, the Texas horned lizard is found in warm areas with little plant cover in southern North America. The northern fence lizard, on the other hand, likes to live in cool pine forests in northern North America.

Social interactions among lizards are best understood for the species that respond to visual stimuli. Many lizards defend certain areas against intruders of the same or closely related species. Territorial defense does not always involve actual combat.

These often involve the erection of crests along the back and neck and the sudden increase in the size of an individual through puffing and posturing. Many species display bright colors by extending a throat fan or exposing a colored patch of skin and engage in stereotyped movements such as push-ups, head bobbing, and tail waving.

Large, colorful horns and other forms of conspicuous head and body ornamentation are often restricted to males, but females of many species defend their territories by employing stereotyped movements like those of males.

However, this is evidently advantageous and has evolved through natural selection. Territories are usually associated with limited resources (such as nest sites, food, and refuges from predators), and a male that possesses a territory will likely attract females.

Most lizards are active during the day. Lizards are cold-blooded animals, which means they rely on their environment to help warm their bodies. They use the heat of the sun to raise their body temperatures and are active when their bodies are warm. The sun also helps lizards produce vitamin D. Their days are spent sun-bathing on rocks, hunting for food, or waiting for food to come their way.

Some lizards are territorial, while others can easily live with dozens of other lizards of many different species. Other than mating times, most lizards are not social, though. There are some exceptions.

Keeping Males and Females Lizards Together

With reptiles, it is not just a question of different species peacefully cohabiting. In nature, some male and female reptiles come together only to breed, spending the rest of their lives apart. Putting opposite-sex reptiles together 24-7 can mean trouble, but so can same-sex cohabitation.

Chameleons prefer to live alone, with the male staying with the female only for a short time to mate. If you put two male chameleons together, fighting will likely ensue. Male iguanas might not just attack other males, but also humans. Females of the same lizard species can often live together, as can one male and several females.

Keeping Snakes and Lizards Together

Most snakes should live alone. However, some species can live with other snakes and even certain lizards. Keep in mind that most snakes require a slightly lower temperature to thrive than lizards, which means you must provide different areas of light and heat in your tank or enclosure.

Different types of garter snakes can coexist. So can rat snakes. However, it’s best to separate the rat snakes when feeding lives or dead prey. Rough green snakes can successfully cohabit with anoles.

If you have the climate and the room for outdoor reptile enclosures, you can put compatible species together in large spaces. Bearded dragons can share space with tortoises, as they do in Wisconsin’s Lincoln Park Zoo.

These reptiles primarily consume a diet of fruit and vegetables, so can share each other’s meals. The bearded dragon also requires some insects to munch on once or twice weekly.

Mixing certain lizard species can work if you plan your terrarium or enclosure carefully. Most lizards require a temperature ranging from 85 to 95 degrees Fahrenheit. Terrestrial, or earth-dwelling, lizards can often live with arboreal, or tree-dwelling, species. Given sufficient space, the two types should rarely interact.

Consider lizard behavior and avoid housing dominant lizards with submissive species. Also take diet, adult size, and whether the lizard is a desert or tropical species into consideration. Although terrestrial and arboreal types can coexist, that’s not true of tropical and desert species. The environment, no matter how well designed, will be inadequate for at least one of them.

Most lizards are active during daylight hours when their acute binocular vision can be used to its greatest advantage. Vision is necessary for most nonburrowing species. The family Gekkonidae, however, is composed predominantly of species that are most active from dusk to dawn. In conjunction with night activity, geckos are highly vocal and communicate by sound, whereas most other lizards are essentially mute.

Lizards spend considerable time obtaining food, usually insects. Some of them, like Iguanian lizards, tend to perch motionless at familiar sites and wait for prey.

They detect their prey using visual cues, dash from their perches to where the prey item is and capture it with their tongue in a process known as lingual prehension (in some cases, their tongues can extend to twice their body length). Iguanian lizards are typically referred to as “sit-and-wait” predators.

In contrast, autarchic gloss lizards (the non-gecko scleroglossa lizards such as amphisbaenians, skinks, whiptails, and others) actively search for prey by probing and digging, using their well-developed chemosensory system in a process called vomero olfaction, as well as visual cues. These lizards do not use the tongue to capture prey; rather, they grab their prey in their jaws.

Hermit crabs come from the northern, tropical regions of Australia, living in the coastal dune-forests where freshwater is available. Weekly they migrate to the shoreline to bathe in the saltwater.

This can often be achieved with a log, rock, or tree branch. An absorbent substrate such as coco peat is important. The substrate should be kept moist to assist in maintaining adequate levels of humidity. Hermit crabs love to burrow, so the bedding can be 2-3cm deep. Hermit crabs are great climbers so their enclosure must be secured with a lid.

Hermit crabs are ectothermic, or ‘cold-blooded’. They, therefore, need heat provided to them from their surroundings. In your home, that is best done with a heat lamp or heat mat, dependent on the size of your enclosure. There must be a temperature variance in the tank so the crabs can move to warm or cool areas as they require; one end should be heated to around 24ºC–28ºC, and the other end left at room temperature.

Hermit crabs require high humidity to keep their gills moist and allow them to breathe properly. Humidity must be maintained at 75-90% by using an automatic mister or frequently spraying the enclosure with water.

A hermit crab enclosure should be spot cleaned weekly, with all bowls cleaned and the water changed daily. The substrate should be changed monthly, or more frequently if required. Hermit Crabs require saltwater for bathing. This should be provided in a separate bowl to their fresh drinking water.

Hermit Crabs live in other creatures’ discarded shells. As they grow, they will leave their old shell and find another larger one to move into. A few spare shells, which should be only slightly larger than their current one, should be kept in the enclosure for such occasions.

Like other crabs, as they grow hermit crabs need to cast off their outer skeleton, this usually occurs about twice a year. After the crab has mounted it needs to be left alone for several weeks until its new skeleton hardens. After molting, the skin is usually left on the floor.

Crabs will eat this skin as it is rich in calcium. They may eat this discarded old skin before you know they have molted. Crabs will usually bury in the substrate for a week or so while their skin hardens up. Make sure there is plenty of food and water in their enclosure even if they are inactive.

Keeping Hermit Crabs together with Lizards is not a wise idea. Some Species of Lizards will eat Hermit Crabs as a meal. The environment of some lizards is vastly different from the living environment for hermit crabs.