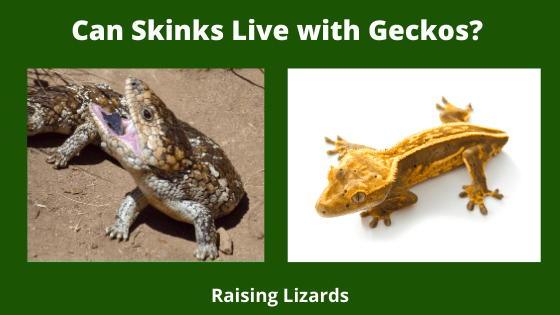 Skinks and geckos are good together as they eat a wide range of insects. Skinks will forage spiders and other ground insects, but geckos often will not bother. Cages with several lizards and possibly both skinks and geckos can be loaded with food more effectively with less wastage than a single lizard on its own. Skinks are slenderer than geckos, with narrow heads and small eyes, a narrow neck which is nearly as wide as the head, and have smooth, shiny, fish-like scales on the surface of the skin.

Geckos and skinks are two types of lizards. They are easy to tell apart as skinks have sleek bodies whereas geckos have velvety skin. Geckos are unique in that they do not have eyelids but instead lick their eyeballs, which have clear membranes to protect them. Skinks are slimmer than geckos. They have narrow heads and small eyes, a narrow neck, which is nearly as wide as the head, and smooth, shiny, fish-like scales on the surface of the skin. Lizards like to squeeze into body-sized holes no more than 5-19mm wide.

They like plenty of holes because many lizards are territorial, so they need their own space. They like their homes to stay in one place too. If it’s disturbed, they’ll move out and they might not have anywhere else to go.

Lizards help scatter the seeds of some of our native plants and may also pollinate their flowers.

Difference Between Skinks and Geckos

Geckos and skinks are both lizards, although they have been classified into separate families. Geckos are one of the largest groups of lizards, with several different families, while skinks fit into just one family. These two types of lizards differ in body shape, skin texture, and eye physiology, while being similar in longevity, the ability to grow back a tail, and highly acute vision and hearing.

The body of a skink is much more streamlined than that of a gecko, and some legless skinks appear snakelike. A skink’s head is much narrower than a gecko. Geckos have a distinct narrowed neck with a flattened body, while skinks have necks that appear to be the same thickness as their heads, and their bodies have a longer, tubular shape.

Skinks can blink, while geckos cannot. Skinks have full eyelids that enable them to blink to keep their eyes moist and clean. Geckos have fused eyelids and use their long tongues to lick their eyes, which adds moisture and removes debris. Since most geckos are nocturnal, they tend to have narrow, vertical pupils to block light. Skinks have round pupils for natural daytime activity, such as basking on sun-warmed rocks.

Geckos have loose, velvety skin, while skinks have tight, smooth skin. A gecko’s skin is covered with tiny scales that give its skin a soft appearance. Skinks have larger, shiny scales.

Geckos will shed skin as a whole piece or in large sections, while skinks shed small bits of skin in patches.

Additionally, many geckos have brighter colors than the dull browns and grays of most skinks.

A more streamlined body shape allows skinks to move faster than geckos. Legless skinks can slither quickly like snakes. Even though geckos move more slowly, they can climb up objects using the adhesive digits on their feet. Tiny rows of hooked foot bristles allow geckos to grip smooth surfaces during climbing. Sometimes geckos will cling to ceilings and windows, while skinks do not have this climbing ability.

Geckos tend to be hardy and easy to maintain in captivity. With so many different species, you are likely to find a good match. Skinks have not garnered the same popularity, although the blue-tongued skink is seen in the pet trade.

Does Your Reptile Need a Tank Mate?

Some lizards (bearded dragons, anoles, geckos) and chelonians (turtles and tortoises) can live together when set up properly in same-species tanks.

Snakes, however, are best housed singly and generally should not be combined in one tank, even if they are of the same species. If you are thinking about having more than one reptile in a tank, you can help ensure success with these six precautions.

Do not Limit Space, Bigger is Better;

First, make sure the tank is large enough to house more than one reptile. Each reptile, regardless of species, must have adequate space to exercise, hide, eat, bask, and generally escape the sight of the other reptile(s). The biggest mistake that reptile owners make is to get too small a tank to house multiple pets. Without enough space, pets in the same enclosure are more likely to fight over territory and get injured. In addition, larger tanks usually require additional heat and light sources, as well as more thermometers, to help ensure environmental conditions are kept constant.

If the tank is aquatic, additional rocks will be necessary to ensure that there is adequate dry land for more than one pet, and if the species is arboreal (tree-climbing), additional branches will be needed to ensure that everyone has a place to perch. In general, the larger the tank, the better.

Do not Mix Species;

House only animals of the same species together; don’t mix. So, for example, leopard geckos may be housed with other leopard geckos but not with crested geckos or day geckos. Different species have different light, heat, humidity, and temperature requirements. Thus, if you are housing more than one reptile in the same tank, it’s best to stick to the same species.

Do Limit Your Tank to One Male: Sex Matters;

In general, groups of the same species females may be housed together with or without one male. However, only one male should be kept in the tank, as males tend to be more territorial than females and are more likely to fight. This is just a rule-of-thumb, as females can fight with each other as well, and individual males may torment females when they want to mate and are rebuffed. Therefore, regardless of gender combinations in a tank, when a new reptile is added and the social hierarchy is reconfigured, tank-mates need to be monitored closely for fighting. If any aggressive behavior is noted, reptiles should be separated immediately before injury ensues.

Don’t Forget to Quarantine Before Adding;

Regardless of species, before a new reptile is introduced into an existing tank, it should be checked by a reptile-savvy veterinarian and quarantined for at least a month to ensure it doesn’t have an infectious disease that can be transmitted to existing pets.

When stressed by a change in environment, a seemingly healthy reptile can break with the disease (such as gastrointestinal parasites) when introduced into its new enclosure. This can result in illness and even death for the newly introduced reptile or for the existing pets. Therefore, housing the new introduction separately for at least a month while monitoring it for signs of sickness can help prevent tragic loss.

Do Prepare for More Cleaning;

If the tank is aquatic, with more than one turtle in a larger tank, there will be more waste in the water, requiring a more powerful filter. All of this translates into more work for more than one pet. This will need to be taken into consideration before the final decision to add a new reptile.

Do Prepare for the Cost;

Twice the number of pets means not only twice as big a tank, it also means twice as much bedding, food, and cage accessories (lights, heaters, rocks, plants, etc.). Therefore, not only is tank set-up more expensive, daily care is as well. Reptiles also need veterinary care, including annual check-ups and deworming. Thus, a reptile owner must consider whether he or she has the finances readily available to support medical care for more than one reptile over the long run, particularly given that many reptiles, depending on species, can live dozens of years or longer.

Do Remember that Animals Have Personalities Too;

Reptiles of all kinds make great pets. When housed alone, they can be interactive, fun, and happy. Before you add a friend to your existing reptile’s tank or cage, be sure that the addition is appropriate, and take all precautions. Even after you make the addition, monitor the animals’ interactions carefully to ensure that the transition is smooth, and remember that not all reptiles, even of the same species, want to share an enclosure. Like humans, some are more introverted than others. For some, living next door to each other rather than in the same house is preferable and better for everyone.

Keeping Lizards together is not usually a wise idea. Not saying it cannot be done but it is risky because of the following Reasons

link to How do you know if your Iguana is Dying?

How do you know if your Iguana is Dying? My Iguana looks like it's going to KICK the Bucket My Pet Iguana is acting sick, not eating, moving turning colors. Diagnose Simple Common...

Continue Reading
link to What does a Baby Iguana Look like?

Baby Iguanas Look Like small 4" Green Lizards when they emerge from their egg after 58 Days. They are green and have long tails. They can scurry around looking for food immediately after...